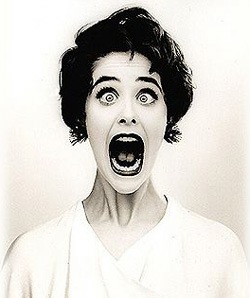 Dr. Stephen Porges emphasizes the importance of bidirectional  neuro feedback between body and brain. Porges emphasizes the importance of relating to an organism (humans) from a bottom up perspective instead of a top down. He uses the example of Descartes, ” I think therefore, I am.”  He explains that many of western therapies have been designed around this idea. What if we have it wrong?  What if  we understand the body from the perspective of ” I feel therefore I am.” What if our nervous system  sends a signal to the brain which then creates the feelings and visceral reactions?

The Vagus Nerve   is the nerve running from the brain stem down in to the autonomic nervous system.

The Dorsal is a branch of the Vagus known for as the, “vegetative vagus,” because it is known for its lower level survival responses connected to our reptilian brain.  In a simplified explanation lets just say that the  theory postulates that reptiles freeze when threatened.

The Ventral Vagus or (VVC)  is responsible for regulating the sympathetic nervous system (SNS) which is known for responding to threat with either fight or flight. The (VVC ), is known as the smart vagus because it soothes the SNS through socialization behaviors with other mammals.

For example,  a baby will often socially engage with its mother if she is not showing engagement.  In the still face experiment we see a mother with flat affect and an infant beginning to feel threatened. The infants first response is to begin engaging with its mother by laughing, screaming, widening its eyes, and eventually if the mother does not react,  we see the infant become extremely disturbed and then eventually shut down. The infant has attempted social engagement, understands fighting and flighting are not possible, resulting in reptilian response of immobilization.

Please note that none of these words I use regarding choice or decisions are pre frontal cortex responses. Instead the autonomic nervous system has its own instinctual reactions that are not connected to the pre frontal cortex part of the (thinking brain). All of these responses happen in milliseconds.

Stephen Porges theory of hierarchy of adaptation of responses:

If the dorsal vagal response is strong or has become a line of defense in the past , then in the present it is quite possible that DVC (dorsal vagal ) will take over causing a freeze response. In some cases it is the response simply because there is no other reasonable choice.

For example, I used to be absolutely terrified of earthquakes when I was a child. We used to experience earthquakes a couple of time  in a month. I remember literally freezing, and then once it was over after about 2 mins,  I would run to my parents and scream my head off.  This is an example of what  Porges might describe as good example of how the nervous system was overridden by the (DVC ) as a result of recognizing within split seconds that:

In most cases, according to the hierarchy of response to threat, you would think I would have screamed my head off first as a way to ask for help (social engagement) , however, my system likely became overwhelmed enough, that  the Vagus resorted to the reptilian response to this threat by immobilizing.

One Reply to “earthquake and freeze response”

This site uses Akismet to reduce spam. Learn how your comment data is processed.